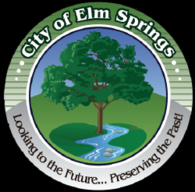 ​​Rich in history and culture, Elm Springs is one of the oldest "little cities" in Northwest Arkansas. The Thomas McClain family was one of the earliest settlers, establishing themselves in 1831. The Hamilton, Ingram, Pearson and Barrington families followed and were prominent settlers in the mid-1800s.

The city has one of the oldest established U.S. post offices in the county, first built in 1848. Elm Springs was located on the old stage line which ran between Neosho, Missouri, and Fort Smith, Arkansas, and relay stops were made here.

The springs that gave the city its name, located on what is now Water Avenue, were once used by Native Americans. The water flow was of such power that John Ingram ran a water mill in 1844. This was the earliest mill in this part of the county and was the nucleus of the village. William Barrington, who worked with John Ingram, is credited with giving the settlement the name Elm Springs due to the large elm trees that stood near the springs. The springs and surrounding land are now part of the Steele-Stevens Heritage Park.

The city thrived until the Civil War with a blacksmith shop, schools, a stagecoach stop, Masonic lodge and more. During the Civil War, the area around the springs became a training ground and encampment for Confederate soldiers that went on to fight at Cane Hill, Prairie Grove and Pea Ridge. After the devastation of the war, which included the destruction of the water mills, the area rebuilt itself to a thriving community once again. Today, the city of Elm Springs is a growing bedroom community centrally located in a rapidly expanding region.​

Find out more at the following: Encyclopedia of Arkansas